By Susan Bartholomew and Carrol Reckard

The AIDS Memorial Quilt began with friends and family from the San Francisco area searching to find a way to communicate and help others understand the loss they were experiencing. In 1987 a group of people from that area got together and decided “to take all of their individual experiences, and stitch them together to make something that had strength and beauty.” That is how the quilt started. It was a great success. Family and friends started to send quilt panels to San Francisco from all over the country. There are now over 29,000 panels. The panels are 3-foot by 6-foot. Displays of portions of the quilt are held at various locations around the country. The entire quilt has been displayed on two occasions in Washington, D.C.

In the spring of 1994, Roland, Mary, Bill, Bobby, and Carrol with very mixed feelings went to see a part of the AIDS Memorial Quilt on exhibit at Ursinus College. Roland was quiet as he walked through the exhibit as they all tried to deal with the overwhelming meaning of what they saw there. Roland signed his name on the panel arranged on the floor that would be used to remember the exhibit at Ursinus and his four friends encircled his name with their own signatures. Roland was very taken by the fact that people made these quilts for someone who died from the HIV virus, and that people loved and cared for people who died of AIDS/HIV.

That night was the beginning of Roland’s quilt. Roland suffered with HIV-related illness for over eight years. During those years, Roland battled with nightmares but also worked on fulfilling his dreams. Those dreams included having his own home with a garden and where he could have friends over; staying in hotels with big beds and swimming pools; vacationing at Disney World as often as possible; becoming an important leader and speaker; having his friends and family around him; and having a committed partner. With a limited time, he risked challenging his fears. Roland’s life changed with his HIV diagnosis – it became richer. Little did hid his friends know on that 1994 spring day that they would be making a quilt so soon.

Roland’s quilt is about his life. We used his favorite colors, and the things that mattered to him. Family and friends were invited to contribute to the making of the quilt panel in memory of Roland. There were 3 themes; his church and family, his home and personal life, and Speaking For Ourselves and his public life. As part of the church and family theme, there were Bible verse needlepoints and the dove representing his Church. The applique of his house is surrounded by the things that mattered in his personal life, like his cat Mittens and the frog that hung on the bulletin board in his hospital room. The logo for Speaking For Ourselves, a self-advocacy organization, was used as the center of his public life, the gavel stood for the years he was president of the Philadelphia chapter of Speaking For Ourselves and for the four years that he was president of the Board, and vice president of the national self-advocacy organization. 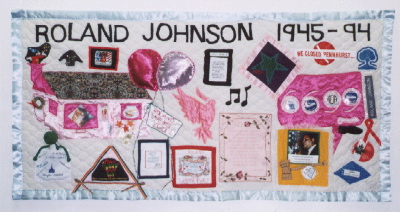 Back to tributes to roland johnson
Back to history